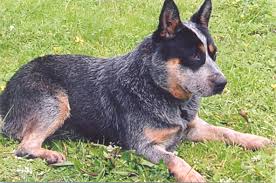 WE pensioned off old Blue, our dog
when old age got him down
We sent him for company
to old Grandma in the town

So, it was this Sunday morning
Blue was fossicking about
through the paddocks near the township
on his normal daily scout

It was a dogs idea of heaven
and old Blue, he rubbed and rolled
till he ponged just like the sheep did
and with ecstasy extolled

Where the matron, in a panic
counted heads in mortal fright
with a smell like that they’d surely lost
a patient through the night

And he lay somewhat bewildered
in the gore, flat on his back
when the mongrel pack descended
in a frenzied dog attack

And the cappuccino maker
copped a mortal wound and died
hissing steam, it levitated
falling frothing on it’s side

And Nick the Greek, the owner
grabbed a shotgun in his fright
blasting into the confusion
of the frantic canine fight

And the echoes still were ringing
when beneath the dying heap
there emerged old Blue, still dragging
at the remnants of his sheep

And she looked out from her front fence
at the town in disarray
at the ambulance, police cars
and you guessed it, the RSPCA