Posted on Friday, 7 Feb 14 by Kev
FORMER prime minister Kevin Rudd is creating a foundation to honour the principles of his historic 2008 apology to the indigenous stolen generation. Mr Rudd today announced he would establish the National Apology Foundation, which he will chair. The narcisist, who is also suffering from Attention Deficit Disorder, says that because he is creating this foundation;

“We are not condemned to a future which sees a continuing division between the lives of indigenous and non-indigenous Australians.”

While you continue to remind us of your one and only claim to fame, and it is a doubtful claim, then you are condemning us to continuing divisions. It simply perpetuates the ‘Sorry Industry’ and that helps no one. Go away Rudd, you totally fucked up Australia and the ALP and you still have the temerity to make sound waves.  A lesser narcistic individual would be so humiliated by the damage they did, they would be silent for decades.
19
Indigenous Affairs, Politics

Posted on Monday, 27 May 13 by Kev
In the heat of the moment a 13 year old girl tells Sydney Swans Goode “You’re an ape” and the world goes ballistic.  Goode point her out to MCG Security and she is removed from her family and apparently grilled for two hours. She is 13. COLLINGWOOD president Eddie McGuire has vowed to seek out the fan who allegedly racially abused Sydney Swans champion Adam Goodes on Friday night and ban her from the club. The mother of the 13 year old girl isn’t happy;

Ms Looney is upset by the treatment her daughter had received from MCG security – who told her family to remain seated as they ejected Julia – and police detaining her for what she said was two hours.

Eddie Maguire and everyone screaming “racist!” need to settle down and Goode needs a few testosterone injections to stop him being so precious.  UPDATE:  (Quote from Bolt) On ABC radio this morning a woman says Aborigines at the same game slashed an Australian flag, replaced the Union Jack with an Aboriginal one and were abusive. Security was called but removed no one. I wonder if Eddie Maguire is looking for these guys.
4
Indigenous Affairs

Posted on Thursday, 28 Mar 13 by Kev
NOEL Pearson’s Cape York welfare reform trial has been a dealt a blow with the Queensland government refusing federal demands to extend state funding beyond the end of the year.

Queensland Indigenous Affairs Minister Glen Elmes told The Australian the Newman government could no longer justify its expenditure on the program.

The trial in four Cape York communities has cost the state and federal governments more than $100 million.

The government mentions there are only a few thousand people involved altogether so what the hell costs $100 million.  If I went to theses communities would I see anything …roads…new schools..what exactly? The report tells us that school attendance is improving and kid bashing is down;

Last year, preliminary findings of the review of the trial — which links welfare to school attendance, child safety, tenancy and convictions — found the communities were recording improvements in attendance and falling child-protection notifications.

But it doesn’t say what the money was actually spent on but Queensland Indigenous Affairs Minister Glen Elmes questions the value for money;

“We simply can’t justify the rate of expenditure over the past four years in just four communities, with only a few thousand people,”

I’m all for helping Australians in difficult times and I have always agreed with Christopher Pearson and his programs but hell, $100 million for four communities seems over the top to me. Tony Abbott wants to see these indigenous welfare reforms now being tested in Cape York expanded to communities across the country.  I trust any continuation doesn’t involve $25 million per community – he’ll never clear the ALP debt at that rate.
6
Indigenous Affairs

Mobs tearing up Logan tonight. Did any of them do a day’s work today, or was it business as usual and welfare on tap?

Not very subtle but its most probably close to the truth. Wong and Emmerson attack, so for some reason Laming’s tweet which only comments on a riot is much worse than Gillard’s office tele calls that organized a riot on Australia Day in Canberra last year. Go figure.
0
Indigenous Affairs, Politics 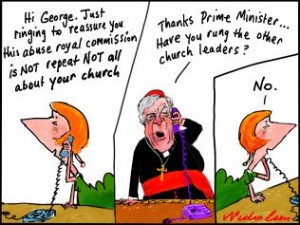 I am concerned about Gillard’s Federal Royal Commission into institutional sex abuse.  The media have concentrated on the Catholic Church and whereas they have a lot to answer for and should be a part of the RC they are not the only perpetrators and, evidence might suggest, they are not even the largest perpetrators.

Reading The Drum, the enclave of Leftist debate, it’s all about the Catholics, yet in my experience, and I have some, the Church does a huge amount of good works with tens of thousands of Teachers, school kids, Priest, parents and laymen all contributing to the community in positive ways.  What we are getting from the media, understandably I guess given that the anti-religious Left hold sway, is an emphasis on the minority who besmirch the Catholic name. If the Commission names and shames these people and they eventually go to court and are convicted then well and good but we need to keep in mind that the target is institutional sex abuse and not just the Catholic Church. State run orphanages, schools, youth groups such as Boy Scouts and Girl Guides and other religious institutions need to get a run as do the Indigenous community. Which raises the question – are the Indigenous communities an institution – will they be included in the TOR.  If not, and I suggest that will be the case, then in my opinion the Commission will not be broad enough. Mal Brough, a previous Howard Government Minister reports on sex abuse within the Indigenous communities;

“And those who have not read the report, Little Children are Sacred, its two authors visited 45 communities in the Northern Territory. They didn’t find sexual abuse in some of those communities, they didn’t find it in most of those communities, they found it in every single community; 45 out of 45. Think about that, the enormity of that for a moment. “Let me take you to Kalumburu. Kalumburu is up in the East Kimberleys. It is a town of about 300. There are only 90 males in Kalumburu. It’s isolated by the wet for a good part of every year. The wet will set in some time this month. “Of those 90 men, in the last two months 15 have been charged with child sex offences. Fifteen out of 90 men. These are the charge sheets. Not one page, not two pages, not three pages, four pages. “They’re all an offence against a child, predominantly penetrating a girl or a boy under the age of 13. Who were these 15 men? They were the mayor, the deputy mayor, two other councillors, the police liaison officer, a truancy officer, two wardens. “What does that tell you? These are people of authority. These are the people that white fellas like me and bureaucrats turn to, who go to consult with about answers to their communities, who we give money and more empowerment to and we walk away saying, haven’t we done a good thing.”

Scott Prasser, in today’s Australian has a well written piece on what Royal Commissions can and can’t do and recommends that;

The Gillard government must avoid any perception that there is any political advantage being derived from appointing this royal commission.

But I’m and old skeptic – I’m afraid it will turn into a witch hunt and I don’t believe the ALP do anything for altruistic reasons.  I suspect they will drip feed ‘leaks’ over the course of the Commission whenever they need distraction from their own incompetence and if Tony Abbott ever walked past a Catholic Church or went to Mass where there is or was or might have been a questionable Priest who might have, or might not have abused children, then rest assured we will hear about it. I truly hope it works as there are a lot of damaged people out in the community but I guess only time will tell. Disclaimer: I am not a Catholic but was born a Methodist.  I became non religious but subscribe to the ethics and moral compasses espoused by the religious bodies.
2
Indigenous Affairs, Politics

Push to keep the Aborigines down

Posted on Monday, 17 Sep 12 by Kev
BILINGUAL indigenous language education should be introduced to all schools with Aboriginal students, and indigenous languages included as an official Closing the Gap measure, according to a parliamentary report to be released today.

Queensland Labor MP Shayne Neumann, the committee chairman, told The Australian the committee would back the controversial use of bilingual education and criticise its abolition in the Northern Territory by the previous Territory Labor government. He said education should be conducted in both languages to deliver the best outcomes. He said that in communities across the nation where English was not the first language, indigenous students had the right to learn in their own language.

The report calls for an emergency response to save the disappearing languages. I would rather the report called for an emergency response to educate the kids in maths, science and English and apportioned their own indigenous language to one period a week. Of course I would change my mind the instant I hear that employers across Australia are now accepting job applications with resumes in Yolŋu. But that isn’t happening soon. Neuman continues to play Canute;

“There were 250 languages at the time of white settlement with only 18 now spoken by significant numbers of indigenous people,” he said.

And the Brits, our ancestors, once spoke Anglo-Norman French. The world changes for the better and the English language has been a big part of that. It’s fine that the kids learn about their own history and language but not to the detriment of English. They need their own language to know where they come from but the need English to know where they are going and they aren’t going anywhere without it.
5
Indigenous Affairs, Politics

Posted on Monday, 4 Jun 12 by Kev
GEOFF Clark, once the most influential Aboriginal leader in Australia, has had his bankruptcy extended for five years amid allegations of undeclared income and assets. Mr Clark was due to be released from bankruptcy but at the 11th hour on Friday, lawyers for Carol Stingel, who was found by a civil jury to have been raped by Mr Clark, petitioned the trustee to file an application for objection to discharge. Good Questions have been raised about his assets being hidden to avoid having to pay out to Carol Stingel.
0
Indigenous Affairs
« 1 2