Posted on Saturday, 5 Aug 06 by maxymax
I never thought I'd live to see the day. In todays Australian the Vietnamese have admitted Australia won the Battle of Long Tan. With several hundred Vietnamese versus 18 Australians dead; with the fact neither the North Vietnamese Army nor the local Viet Cong never ever engaged Australians in major battles after that day and with their plan to annhilate the Australian Task Force by attacking the base with a 2,500 man regiment stopped dead by 108 Aussie infantrymen from Delta Coy, 6RAR; one wonders why anyone could ever think differently. But communists do think differently. As I recall at the time the communist forces claimed they had wiped out an Infantry battalion, 21 tanks (there were none at the battle) and as an aside, had sunk HMAS Sydney (for the fourth reported time) 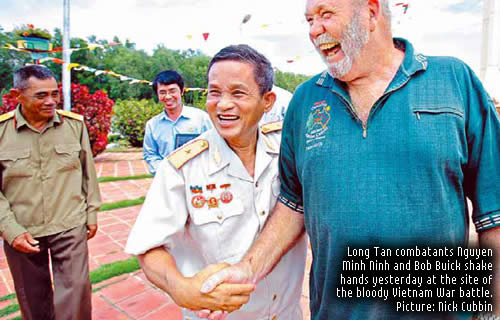 "For 40 years they have lied about Long Tan," said former platoon commander Dave Sabben, as he stood at the spot where he and his troops repulsed Vietnamese soldiers. "They have never conceded they had their arses licked. [I'm sure Dave would've said 'kicked'] Instead, they lied to their own people about what happened here. I find it offensive." Now, 40 years on, Sabben and Buick - who commanded Australian troops during the battle - have returned to Long Tan, east of Ho Chi Minh City,[they mean Saigon] for a final showdown with the enemy.

The two Australians greeted their Vietnamese counterparts with warm handshakes in the plantation, near the memorial cross to the 18 Australians who died in the battle. After some small talk, the crucial question was posed to the Vietcong commanders: who won the battle of Long Tan? Nguyen Minh Ninh, former vice-commander of Vietcong D445 Battalion, thought carefully before answering - and then dropped a bombshell that exploded 40 years of official history. "You won ... tactically and militarily, you won," he said. His answer stunned Buick and Sabben. It was the first time a Vietnamese commander had ever admitted the truth about Long Tan.

The photographer claims the picture of Bob Buick, long time mate, and the ex 2IC of D445 Battalion, was taken at the site of the battle. With nary a rubber tree in sight and with pavers down on the ground I would suggest the pic was taken at Xa Long Tan, the village, not the battle site. I was at the site less than two years ago and it is well into the rubber plantation. I well remember seeing vague fleeting images of rubber tappers moving though the trees invoking bad memories. In 2004 I went back to Vietnam and visited the site at Long Tan. I wasn't at the battle but the scene is now a 'must do' for Vietnam Veterans. As an infantryman with some experience I tried to explain how the soldiers would have felt;

We gaze at the cross deep in thought and I try to think of words to describe the events and feelings on that day. It’s not easy. Sometimes thoughts and feelings don’t translate easily into words. But try and imagine this. You are walking alone in the bush and someone fires a rifle towards you. You hear the crack-thump associated with close shots and you feel targeted and frightened. The rifle round makes a loud noise that startles you. Now put yourself in D Company’s shoes and try and imagine a couple of hundred people firing multiple rounds all seemingly targeting yourself. The noise is incomparable. There is no similar noise effect anywhere in the world that simulates hundreds of auto rounds coming towards you. While this crescendo tears apart your senses, friends are dying around you. The noise continues for hours, you are running out of ammo, you know the RAAF will have trouble resupplying due to the torrential rain and the talk amongst you is that this is it. You know that half the platoon is dead or wounded- the screaming is always a give away. You can see you are being attacked by assualt forces numbering in the hundreds and you only have maybe fifteen fit soldiers still able to fight. So what do you do. Run? Roll over and adopt the feotal crouch? Just lay there and scream for your mother or father? No. You make a stand and fight. It’s the difference. It’s what good training sets you for. It’s the essence of being a ‘Digger’ There are only two memorials to foreign armies in Vietnam. One at Dien Bien Phu where the French threw tactics out of the window and paid for it and the other is at Long Tan where D Coy held the thin green line and by doing so wrote themselves into history books.

My full report of that trip is here If I was amazed to read the Vietnamese had finally acknowledged D Coy kicked their arse at Long Tan, I was stunned to read in the Australian editorial that it was their considered opinion that our presence in Vietnam has been vindicated.

It has been more than 30 years since the fall of Saigon. Although this newspaper opposed the war in hindsight, the history of Vietnam under communist rule seems to vindicate the effort. Ho Chi Minh's Stalinist regime was monstrous, even as it was lionised in the West. Vietnam still struggles under political and economic repression. But by stemming the totalitarian tide that was sweeping southeast Asia at the time, Australian and US troops may have saved countless millions.

Thirty eight years ago, I, as an army NCO was well aware that all Stalinist regimes were monstrous and that if anything, Ho Chi Minh's regime would be worse - the Australian finally gets the picture and agrees publically. Maybe, just maybe all those never-to-be-forgotten friends didn't die in vain. The left of course will always see things differently which happens when you live in a country, Australia, and believe in the wonder of communism and hoping and working for the defeat of your own troops. It is to these people that I address the following: It is a myth that the Free World Military Forces lost the Vietnam War. Called the American War by the Vietnamese the Communists lost at Tet 68 when they had their arses handed back to them on a plate. The South Vietnamese rebellion that the North had banked their money on didn't eventuate and when Nixon released the dogs of war in the form of B52s a year or two later, they were forced to the Peace Talks in Paris. Agreement was reached, all beligerants withdrew; the US and Australia went home and the North Vietnamese pulled back north of the DMZ. The war was over. Two years later the North Vietnamese, rearmed by the USSR who wanted warm ports on the Pacific rim, invaded the South. That was the tragedy that was Vietnam. Millions were subject to execution and/or retraining camps and those Southerners who could, escaped by ship, by boat, almost by air mattress if that's all they could find. Thousands more died on the seas but they considered that risk better than living under Ho Chi Minh. Anything would be better than that.
Defence