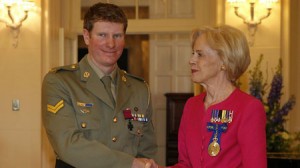 AUSTRALIA’S newest Victoria Cross recipient is now a part-time soldier working in the mines of Western Australia. 6RAR Corporal Daniel Keighran received the nation’s highest military honour today for repeatedly drawing enemy fire during a 2010 battle in which one of his mates was killed. He said his company faced at least 100 insurgents during the battle at Derapet, in Oruzgan province, Afghanistan.

“Training took over,” Corporal Keighran said. “There was a situation and that’s the way I reacted.”

The VC citation says Corporal Keighran’s actions were instrumental in ensuring Australian and Afghan troops involved were able to withdraw without further casualties. “Corporal Keighran, with complete disregard for his own safety, broke cover on multiple occasions to draw intense and accurate enemy fire to identify enemy locations and direct return fire from Australian and Afghan fire support elements.

“During one of these occasions, when his patrol sustained a casualty, he again, on his own initiative and in an act of exceptional courage moved from his position of cover to deliberately draw fire away from the team who were treating the casualty. “Corporal Keighran remained exposed and under heavy fire in order to direct suppressing fire and then assist in the clearance of the landing zone to enable evacuation of the casualty. “These deliberate acts of exceptional courage to repeatedly expose himself to accurate and intense enemy fire, thereby placing himself in grave danger, ultimately enabled the identification and suppression of enemy firing positions.”