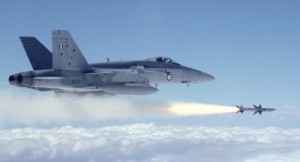 TWO bombs have been dropped by a Super Hornet in Australia’s first direct strike on a terrorist target in Iraq, Defence has revealed this morning. Hooray F***k! Two bombs!  The tide of war has surely changed! Not. Even armchair-warriors will be aware by now that fighter bombers do not win a war by themselves, even if they cost the Australian government $250 million each.  Troops are need on the ground and so far, the Iraq army haven't exactly covered themselves in glory. The western powers have handed over the tactical advantage to the terrorists by rattling on and on about how we won't drop our bombs unless we can be guaranteed  that no civilians will be hurt. The Terrorists, who read Facebook, Twitter and local media, react accordingly, adjust their tactics and the subsequent windows of opportunity for the fighter bombers to attack are fleeting. $250 million dollars per copy of RAAF,  USAF and other airforce's fighter-bombers cruising around looking for politically correct targets, in between refueling training, while the Terrorists hug the civilian population. It's going to be a long war. News reports show videos and pics of Terrorists raising their black flag near Kobane.  Why are they still alive, I wonder?  If the news cameras can see them why can't the missiles or smart bombs? The only people being serious about this war seem to be the Terrorists and if that continues, a lot of innocent folk are going to be decapitated or sold into slavery. Is there an agenda I'm missing?
0
War on Terror