Give us a break Penny 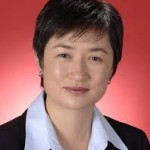 Acting Opposition Leader Penny Wong said just four days into the 2016 election year the government was “in chaos” and that Mr Dutton’s texting mishap, in which he labelled a senior female journalist a “mad f—ing witch”, warranted a strong response from Mr Turnbull.

Settle down Penny, the government isn’t in crisis, the ALP are – remember 14%…TURC etc.  Turnbull is just getting rid of Abbott supporters as he battles to come across as In charge.  Men talk like that and to suggest that Dutton’s “mad witch” text is anything other than a miss pressed button is ludicrous.  A bit clumsy is all……unless he meant to do it but I can’t see any advantage in that…so let’s just call it clumsy. The mad witch herself didn’t seem to put out by the text so why should anyone else? Jamie Briggs had to go as he made no bones about being an Abbott man.   Prosecution at Twitter and in the media overall, and Prosecution they be, can only come up with “complimented a young staffer and then pecked her on the cheek when he left to go back to his room” Waiting for evidence of a crime that requires him to fall on his sword…waiting…waiting. Drunk?  No evidence…hitting on the girl…no evidence…Giving away State secrets whilst drunk in a bar…no evidence. Notwithstanding the lack of any crime, Briggs’ political career is most probably over so let’s forget him and move on to the real problem. Malcolm Turnbull.
3
Politics