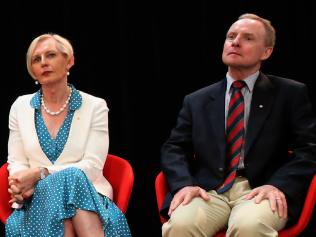 After being  bouyed and lifted by the Sgt Troy Simmonds’ interview we have this embarrassing picture and article as headline news in today’s The Australian.  For those who don’t know, the woman was a man and Lieutenant Colonel in the Army who changed sides. The guy is retired Major General Morrison, named yesterday as the Australian of the Year (AOTY). She is having a cat fight and isn’t happy that she didn’t get AOTY. It is supposed to be unifying, dignifying and above reproach. But the freshly minted 2016 Australian of the Year award is embroiled in bittern­ess, recrimination and division with a finalist from the beaten brigade, transgender military officer Catherine McGregor, shooting down the choice of David Morrison as “weak and conventional”. A rift between RAAF reservist Group Captain McGregor and her former boss, retired Lieutenant General Morrison, the former chief of the army, was aired in a gay and lesbian journal, the Star Observer, as the nation went back to work after Australia Day celebrations.

“He’s on a steep learning curve when it comes to LGBTI (lesbian, gay, bisexual, transgender, intersex) and trans issues, he needs to learn a lot and rapidly,’’ Group Captain McGregor, a former polit­ical adviser, told the journal.

Catherine, nobody needs to be on learning curve about LGBTI issues be they steep or flat.  We aren’t interested in your medical condition and if you don’t believe that try and raise the subject in your local pub.  Shut up about it and go on with your life.  No reasonable person would condemn you for your affliction but we don’t need to hear about it every second day in the  media. It’s bad enough that the panel chose another activist as AOTY without cat fights from losers. While the good Sergeant was fighting the good fight his boss, the General commanding the Australian Army, was fighting  for gender equality in a video that went viral as a pidgeon pair with Gillard’s misogyny speech. (Scripted, I might add by Catherine when she was Malcom). It became his claim to fame and it is obviously the main consideration in his selection. What must  the western world think of us.  Our allies will be sniggering and the ADF simply embarrassed by it all.
7
Politics