It's now Sunday and I've recovered sufficiently to feel confident enough to write in complete sentences. 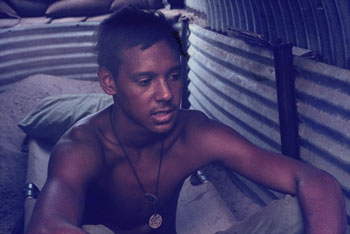 I spent the day with Percy Meredith, a digger in Recce Pl 7RAR with me in Vietnam. The previous evening I found a photo of Percy and printed it out for him. As he showed everyone he met I felt the need to apologise for having had a mere child in my platoon. Did I really tell this 'child' to do things of a dangerous nature? The short answer is yes and he certainly soldiered at a level well above his juvenile appearance. In fact he was as good as any and a very good forward scout.

We gathered, talked and marched through Brisbane. At the end of the march there was a comemmorative service at the Vietnam Veteran's memorial in ANZAC Square with Adrian D'Hage, MC being given top billing. I have posted on D'Hage previously and wondered what the Vietnam Vets organization were thinking when they invited him to the event.

He didn't disappoint delivering a peace message within the body of his speach. One would think that Adrian D'Hage of all people would realize the peace we enjoy is directly attributable to the fact that our young men and woman have gone to war when called.

Brigadier d'Hage said the lesson of Long Tan was to show the futility of war and the need for tolerance and acceptance of different cultures and faiths.

I beg to differ, old chap. The lesson of Long Tan was the courage of the participants with the 'futility of war' being a very moot point. If we accept futility as 'uselessness as a consequence of having no practical result' I would suggest most wars do have a practical result with the demise of Hitler and Tojo being a good example.

“Young men and women are once again paying with their lives in Iraq, in Afghanistan and more recently in Lebanon.”

Negotiation should be the first resource, with war only as a last resort, Brigadier d'Hage said.

Brigadier Adrian D'Hage is himself a lesson in futility espousing words and ideals as the only ammunition against terroists prepared to blow up themsleves and their children in the pursuit of a new world order that doesn't include infidels. There is no point negotaiting as a first resource with a group who detonate as a first resource.

Jesus Adrian, come back to the world.

There were mobs of KIWIs breasting the bar and as always they are treated as just another digger albeit with funny accents. Considering the NZ impact on the Battle of Long Tan one would imagine that the NZ press would be all over the celebrations of the 40th anniversary but when I linked to the NZ Herald the only mention I could find of Long Tan solicited a subscription to actually read the link.

I later went to Gallipoli Barracks at Enoggera to view the Drum Head parade [scroll down to para 5] and the concert. Organizers had found Adrain Cronauer, the original 'Gooooooooooooood Mornnnnnnnnnnnnnnnning Vietnammmmmmmmmmmmmmm' DJ and he didn't disappoint. Neither did grey haired Col Joye and the Joy Boys nor Rhonda Burchmore who sang well albeit with her quality voice and interpretation overshadowed by her long legs appearing to represent a full two thirds of her body length. I stood along side Minister for Veterans Affairs Bruce Billson and his delightfull wife Kate, sharing the musical memories of the era with them and know that they both have a sympathetic approach to Vietnam Veterans.

We stayed late and reminisced until common sense bid me call my daughter Jennifer with a coded message along the lines of Dad...Enoggera...fetch!