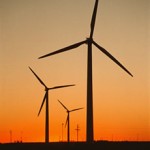 From todays Climate Change report in The Australian comes this little gem. EARLIER this month, the first Australian order for wind turbines for 2010 was made. It was also the first in three months and just the second since the bottom fell out of the market for renewable energy market in October.

The order was for just two wind turbines, with a capacity of 4 megawatts and a likely cost of $10 million. It was made not by a commercial wind farm developer, but by a 1100-strong community group in Victoria's Hepburn Springs, who have decided to chip in anything from a few hundred dollars each to make their shire carbon neutral, at least on the energy front.

$10 million divided by 1100 comes to $9,090.90 per man, woman and child living in Hepburn Springs suggesting anyone chipping in a few hundred dollars is a tight arse. Whether they 'chipped in' out of their wallets or the council spent their rates on the wind farm is neither here nor there. The point is they are up for the cost and will have a long wait before their capital expenditure is regained. If we presume the winds at Hepburn Springs blows day and night 365 days of the year then they might get their money back just before they retire or die but it doesn't. Weather patterns suggest Hepburn Springs is a windy town but the residents will still need base load power from the terrible coal fired power stations. So $10,000 capital investment and periodic base load costs. I'm obviously missing something here. Are the residents all Greenies, mathematically disadvantaged, endowed with more money than sense or just happy to see the wind turbine supply company make a lot of money at their expense. Maybe a Greenie dropping by this site accidentally (I wouldn't expect them to deliberately visit) can explain in monosyllabic terms just what it is I'm missing.
3
Climate Change