Posted on Friday, 24 Jan 14 by Kev
The ABC maintain their bias as they do their best to denigrate the Abbott government.  Their mode of attack this week has been to acuse our sailors of torturing boat people with scurrilous statements by "they would say that" type boat people being presented as fact.

The asylum-seekers claimed the burns were a result of being forced to hold hot engine pipes by navy personnel. They also alleged they were badly beaten by navy personnel before their boat was turned back to Rote Island on New Year's Day.

The pic offers proof that the hands have been burned, not that the burns were inflicted by a sailor, although the ABC presents it as fact. 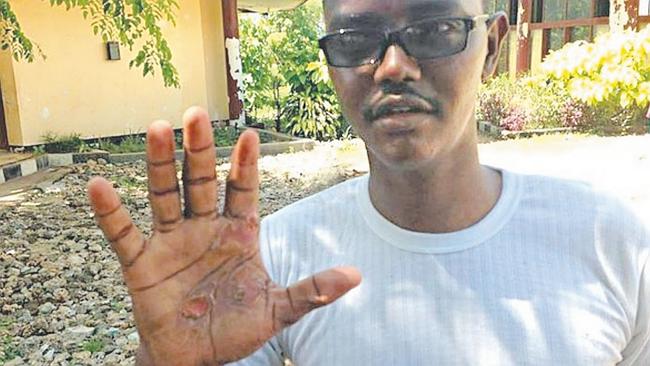 The Australian heads their coverage with "ABC sticking to its story as 'abuse' doubts mount" while the Abbott hating Fairfax guys at The Age,  totally in step with the ABC , says  "Secrecy on boat policy leaves navy vulnerable" The anti Conservative media are on a campaign to denigrate the government and this is just another battle in their campaign.  To quote assylum seekers without question, when it is obviously in the seekers interests to claim "they beat me up etc", is unproffessional and needs calling to order.  The ABC is the voice of Australia throughout the Pacific region courtesy of the Gillard governments handing them the contract without going to tender, so you can imagine how our reputation suffers.  In their attempts to make Abbott look bad they are making Australia look bad.  Millions of uneducated Moslims in the region still believe that Bush was responsible for 9/11 so they are very susceptable to believing the fact-deprived propaganda of the ABC. Week after week the ABC are being called to order over their bias and yet the government have done nothing to address the inbalance.  Where are you Malcom? From The Age;

Allegations of orchestrated abuse occasioning actual bodily harm have been made by asylum seekers against this country's Navy. The allegations are extremely serious and appear to be backed up by photographic evidence.

If proved, they would constitute torture by our military and would shred Australia's international standing.

A picture of someones burnt hand does not constitute 'a serious allegation backed up by photographic eveidence'   In the absence of something like a pic of a Aussie sailor forcing the hand of a asylum seeker onto a hot exhaust pipe then the media need to shut up. It ain't evidence that our sailors did anything but Mark Kenny, the Age's Chief political correspondent, somehow or other believes it does - based on what Mark? With a general election due in Indonesia later this year, election rhetoric in Jakarta is simply grandstanding by would-be politicians going for re-election or election and will have little input on the whole picture.  Indonesia doesn't need 10,000 foreigners camping in their backyard while they wait for passage to the land of the big handout so saner heads in Jakarta are keeping quiet and letting it run its natural course. Abbott will win out in the end.
0
Border Control, Politics