Goodes needs to broaden his horizons 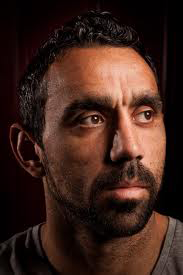 Adam Goodes, current Australian of the Year, is proving a contentious choice.  Other than Aussie Rules fans, very few Aussies had heard of Adam until he abused a 13 year old girl at football match for saying “Way to go, you Ape”  or whatever.  He took this as a racist statement and called for her to be removed from the grandstand, which she was. He is reported as “being gutted” by the girl’s words. In my youth, on the football field, I’ve been called “Big hairy ape” because, basically, I am big and hairy. Well at least that’s what I thought, but obviously there are different interpretations of the term and every man has the right to call it for what he believes.  If Adam Goodes has been referred to as an Ape previously and took it as a racist statement then that is his right.  But seriously, we are talking about a 13 year old girl who,  when she says “I didn’t mean it to be racist” has to be believed, or,  at least given the benefit of the doubt. So when he was announced as Australian of the Year, the only way most Australians knew him was because of this incident.  Depending on your viewpoint, he was thusly appointed due solely to his being the victim of a racist attack, or, because,  as a hulking 6 foot plus fit footballer he abused a pudgy 13 year old teenage girl. Either interpretation is not a good basis for selection. If the Selection Board wanted to appoint an indigenous Aussie as Australian of the Year I can think of dozens, off the top of my head, who,  with greater intelligence and political savvy, could do much more for their people.  Pick your favourite from this list So now he is the Australian of the Year,  a position wherebye the encumbent is expected to draw together different parts of the community and thus help his or their cause, in this case,  the cause of indigenous Aussies. Since becoming AOTY Goodes has been noted for his absence in the media on subjects other than football, with one extreme example.  Earlier this week he announced that he now finds it hard to say I am proud to be Australian after seeing Pilger’s ‘Utopia’  Not proud to be an Australian…John Pilger…Utopia…FFS who is advising this man? John Pilger is an expat Australian who, simply put, hates us.  He has made a career out of this hatred and for years has penned propaganda that always reflects poorly on Australia and whatever he says has little impact outside of the Green-Left of the political divide.  That is, about 10 % of the community give Pilger any credit whatsoever.  This 10%, of course, ecompasses the ABC and SBS where he is often seen talking about his hatred of Australia – but we expect that. Adam Goodes take on Utopia. Adam, heads up mate, you have just alienated 90% of the population, or, at least, 90% of those who are politically aware. NOT the way to go. To approach the problem of indigenous Aussies simply from the “racist attack” point of view is ignoring the elephant in the room.  It ignores the damage indigenous Aussies do to themselves and to quote Pilger, who blames all problems on white Australia, gets us nowhere. If, as Adam Goodes believes,  hostility to John Pilgers film is a denial of the nations brutal past  then Goodes and Pilger are equally guilty of denying the present and this denial bodes poorly for the future. Look around you Adam.  Look at the programmes that are helping your disadvantaged mates and build on that.  Look at child and women abuse, alchohol and drug dependancies, lack of support for education, waste and theft of governmet monies and use your position to agitate for improvements.  Start another education scholarship system as an adjunct to your help for young Aussies in the field of football. Expand your horizons and seek advise outside the Green-Left political arena or most will simply wait until you’re gone and that would be a shame…a waste of the hopes of a lot of people… a waste of a chance to help. UPDATE: I have include some extracts from an interview by Bess Price, one of those I thought would make a better AOTY than Goodes.  It is listed on the RHS Menu under “Worth Reading”
1
Indigenous Affairs, Politics