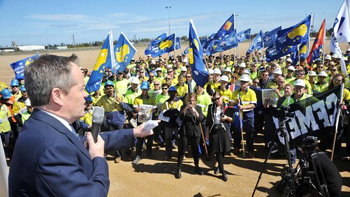 Bill Shorten has no shame – during the Rudd/Gillard/Rudd debacle the government gutted the Defence budget in a vain attempt to balance Swan's budget.  The budget didn't balance and Defence aquisition programmes were put back years. Now he has the temerity to attack Abbott over the fact that a Japanese sub is one of many being considered to replace the Collins class fleet. His populist statements at Adelaide yesterday reflect his fighting for the unions, including the criminal based CFMEU, that were involved in the Collins class subs and has nothing to do with the defence of the country. One union idiot shouted "Last time we had Jap subs, they were in bloody Sydney Harbour” referring to the midget submarine attack in 1942. I hasten to add that neither Shorten, nor his audience were even born then.  It was another century and another Japan.  Today's Japan is a major defence and trade partner who, with the US and Australia, constitute the main Pacific area defence pact. Shorten goes onto say; “This is a government with a short memory,” he said. “In the Second World War, 366 merchant ships were sunk off Australia.” Short memory!  From Wikipedia;

The 28 Japanese and German submarines that operated in Australian waters between 1942 and 1945 sank a total of 30 ships with a combined tonnage of 151,000 long tons (153,000 t); 654 people, including 200 Australian merchant seamen, were killed on board the ships attacked by submarines.

Even when he gives a speech he can't get it right.  There were 18 more ships sunk but they were as a result of  surface raiders, both German and Japanese, but I presumed Shortens populist spray was directed at the Japanese only. German....hmmn.  Their submarines are also in the mix for selection.  The cost of 12 German submarines would cost us  $20 billion,  The Japanese  Soryu Class submarine would come at a similar cost while should Australia go Shorten's way it would cost us $50 billion. $30 billion cheaper - you would have to consider it and think what you could do with that money.  Maybe it could go to paying off some of the debt Shorten's mob have left us. Due to the fact that the ALP killed Defence planning with their budget cuts we have a potential problem of having gap with no submarines at all.  For this reason, and considering costs, something the ALP never did, the Japanese solution looks like a winner. Quicker and cheaper potentially eliminating the no-submarine gap. The decision is due later this year and I'm sure that a lot of the work will be done in Australia if the project goes ahead but from my point of view, the less union involvement the better.
3
Defence