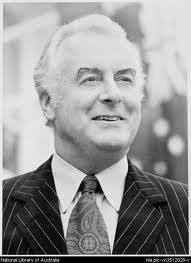 Gough Whitlam, the 21st Australian prime minister, passed away earlier this morning. He served as PM between 1972 and 1975 before being sacked by the Governor-General and subsequently, by the electorate,  at the 1975 general election. As a young Infantry Sergeant I was called before my Officer Commanding and formally asked if I would continue to serve without pay in the event that Fraser maintained his attempt to rid Australia of Whitlam and his decaying government and supply dried up. I answered in the affirmative recognizing the country needed to stave off bankruptcy and only suggested if the stalemate continued then the Army needed a plan to feed my wife and child. I have dreaded this day, not so much because of the man's demise, but more because we now have to endure weeks of canonization by the media of a man who, at best, we can say, his road to hell was paved with good intentions. The Left, and those who either ignore facts or make them up, will be working overtime to give him credit where none is due and to wash over his errors. And they start; He was good for women Tanya Plibersek:

Gough’s reforms for women were landmark. They included the election of the first Labor woman to the House of Representatives, Joan Child, in 1974.

She means other than Dame Enid Lyons who was elected to the House in the early 40s. He cut Tariffs  Sure did.  Tim Colebatch explains;

John Stone, deputy secretary of Treasury at the time, wrote recently that the committee's existence was kept secret even from Treasury. Stone wrote a memo endorsing lower tariffs as a goal, but arguing that an indiscriminate cut would leave excessively protected sectors unharmed, but close more vulnerable plants.

A year later, after the tariff cuts, import volumes jumped by a third, and the current account deficit was here to stay. Manufacturing lost 138,000 jobs in two years, and high unemployment became entrenched. The tariff cuts were only one factor in all this, but they symbolised the defects in Whitlam's "crash through or crash" style of decision-making.

He instituted free Uni education. Sure did and those who gained by that move have reason to be complimentary to Gough but in life there are no free dinners and someone had to pay.  The taxpayer paid and in due course Hawke adjusted the scheme and brought in costs to students. He brought the troops home from Vietnam. No he didn't.  All he did was bring home the few Training Team guys still left in country.  1 ATF had been withdrawn by the McMahon government before Whitlam cam to power. From Wikipedia;

On 18 August 1971, Australia and New Zealand decided to withdraw their troops from Vietnam, with the Australian prime minister, William McMahon, announcing that 1 ATF would cease operations in October, commencing a phased withdrawal.

I've almost given up correcting Whitlam lovers on this one but as they maintain the rage, I will maintain telling them the truth. Financial management. 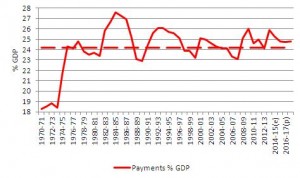 As mentioned above, his road to hell was paved with good intentions, but, like the Rudd/Gillard/Rudd government the great programs were never placed against the balance sheet to see if we could afford them. We couldn't. In this graph from Catallaxy file Professor Sinclair says, Australia never recovered from the Whitlam era.  I might add Whitlam tried to fund his grandiose schemes but did so by trying to borrow money from the Arabs.  The Khemlani Affair put the icing on the cake as it became apparent to all that they were out of control.  It gave Fraser the impetus to deny supply that ended in Whitlam's dismissal  Whitlam opened up dialogue with China. Yep. he sure did.  He visited China as Opposition leader in  June of 1971 and whereas establishing diplomatic relations with China had to be considered, I would have preferred he wait until our troops had been withdrawn or otherwise recovered from, or died of their wounds.  Troops were still in Vietnam (4RAR left in October 1971) and while our troops were being killed or wounded by the VC or North Vietnamese, these communist soldiers were just aiming the rifles.  China was busy making the AK 47s and loading the magazines and for the years from 1972 thru to 1975,  they rearmed North Vietnam, in partnership with the USSR, to enable the 1975 invasion. I took it that Whitlam favoured the Chinese communists over the sacrifice of the Diggers and while he later had Jim Cairns as his deputy I can understand why.  If Whitlam was iffy, Jim Cairns was an out and out communist and did all he could to assist the communists to win the war. I thought recognition was a bit early - wait until my mate's bodies are cold in their grave, I thought at the time. He instituted Multiculturalism. Yep he did.  With the exception that the South Vietnamese who fought his communist mates weren't included in his version of multiculturalism. He is quoted as saying;

"I’m not having hundreds of fucking Vietnamese Balts coming into this country with their religious and political hatreds against us!"

If the Vietnamese hated anybody, other than the communists who were busy murdering and raping their countrymen, it could only be politicians who said such things.  The religious Vietnamese he talks about were, on the main, Catholics with some Buddhists thrown in.  The only reason he could hate them so is because they were fighting the communists. As a further example of his political leanings he denied any reports of violations in communist SE Asia;

‘In September 1978, Whitlam addressed a conference in Canberra where he declared that he did not accept the validity of any of the reports about human rights violations in Vietnam, Cambodia or Laos. He was particularly emphatic about Cambodia, declaring: “I make bold to doubt all the stories that appear in the newspapers about the treatment of people in Cambodia.”‘

He supported Jim Cairns until he had to sack him over treasury matters.  He never sacked him while he was courting the communists.

When he was a senior Cabinet minister in the Whitlam Government, Cairns set out to use his high office to promote Soviet foreign policy aims. In 1973, when he was Minister for Overseas Trade and Secondary Industry, he sponsored a visit to Australia of representatives of communist North Vietnam. On April 26 — the day after Anzac Day — Cairns was photographed with his guests in the Sydney Town Hall, surrounded by Viet Cong flags and a huge picture of dictator Ho Chi Minh.

In 1974, official letterhead stationery of the Australian WPC described Cairns both as President of the Committee of World Peace Councillors in Australia and as Deputy Prime Minister. One such letter, dated 2 September 1974, advertised a visit to Australia later that month of a WPC delegation, headed by long-time KGB agent and WPC leader, Romesh Chandra.

It is worth remembering that Australia’s Constitution (section 44) clearly states: “Any person who … is under any acknowledgement of allegiance, obedience, or adherence to a foreign power … shall be incapable of being chosen or of sitting as a senator or member of the House of Representatives.” Cairns’s loyalties to a foreign power — and an enemy foreign power at that — should have automatically disqualified him from sitting as a member of parliament, let alone from becoming Deputy Prime Minister.

It is little wonder, then, that when Cairns became Deputy PM on 10 June 1974, the then US Ambassador to Australia, Marshall Green, warned Labor Prime Minister Gough Whitlam of Washington’s alarm that Cairns might have access to classified information on US bases in Australia. Whitlam assured Green that Cairns had not asked about the functions of the US bases and would not be briefed on the matter.

I never looked up to him, always thought he and I were on different sides but he certainly caused a lot of debate and even though he could never fund his grandiose ideas he did at least have them.  It wasn't an untimely death but I dread the media over the period between now and his state funeral and will stay away from the ABC lest I throw something at my expensive TV in frustration at the lies that are about to wash over us. November 11 1975 was a big relief and a highlight in my life. Vale Gough.
25
Politics