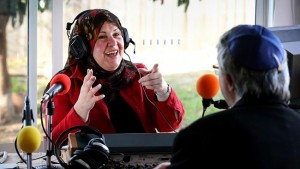 Diana Abdel-Rahman, president of the Australian Muslim Voice in Canberra, says the Muslim community has “very deep concerns” about the Abbott ­government using its counter-terrorism policy as a “political wedge” to evoke anxiety.

Evoke anxiety!  The way I see it is that it's the Muslims provoking anxiety.  9/11, Bali; Jakarta, London, happy snaps with son holding severed head and then there is this little list.

Authorities believe that around 150 Australians are currently fighting alongside ISIS in Iraq and Syria, making the country the highest foreign per capita contributor to the violence. Many more have left the country for the Middle East in recent weeks, though their intent in doing so has not yet been determined.

And Abbott is evoking anxiety.  God give me strength! She continues;

“I believe the language that he uses and the tone that he uses, the consistency of the words that he uses … (is) as if he is taking advantage of a situation to heighten the levels of fear in the community to a point that it can be perceived as being racist,” Ms Abdel-Rahman said.

Technically she is wrong.  If Abbott's legislation was targeting Lebanese, Syrian, or Iranian nationals then she might have a case but Islam is a religion followed by Muslims of all nationalities so targeting them may be lots of things, but it isn't racist. The levels of fear have been evoked by the radical Muslims, not by any politician.  The politicians are simply trying to make the country safe.

Her father migrated to Australia from Lebanon 64 years ago and Ms Abdel-Rahman said four generations of her family had felt “alienated” during the political debate on how to combat Islamic State.

If four generations of her family are feeling "alienated" then they need to talk to their Muslim mates and get them to quieten down. No good talking to us. we're not the problem.
9
War on Terror