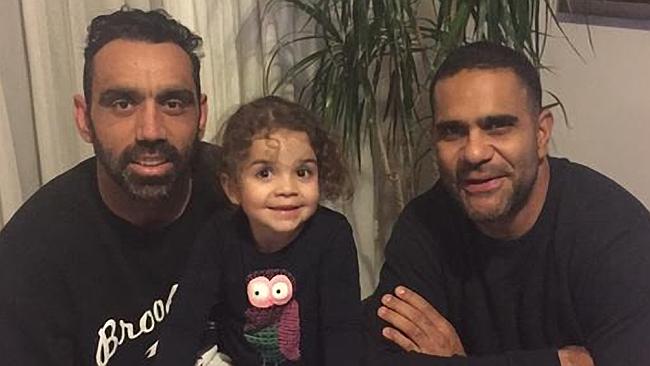 Posted on Wednesday, 29 Jul 15 by Kev
Adam Goodes’ campaign for pre-selection continues as Chip Le Grand, his current campaign manager, gets another above-the fold front page article in today’s Australian. The article draws hundreds of comments, a lot of which point out that the spectators are booing Goodes because he once publicly abused and humiliated a teenage girl. Most Australians don’t like large, adult males abusing teenage girls. Chip ignores this opinion because it doesn’t suit his agenda but the spectators don’t and won’t in the future. If it is racist then one needs to ask the questions – why aren’t all the other indigenous players boo’d. What is it that sets Goodes apart?  I would have to say it is his activist profile.  All the other guys are in football to play while Goodes is, at this stage of his career,  in football for political activist reasons and the crowd don’t like it.  They go to the game to be entertained with football skills, not to be harangued and called racists as part of one man’s campaign for pre-selection or Reconciliation. Subsequent to the abuse incident he was appointed Australian of the Year and since then, this current campaign aside, has been noted for his absence in the media on subjects other than football, with one extreme example.  In early March he announced that he now finds it hard to say I am proud to be Australian after seeing Pilger’s ‘Utopia’  Not proud to be an Australian…John Pilger…Utopia…FFS who is advising this man? John Pilger is an expat Australian who, simply put, hates us.  He has made a career out of this hatred and for years has penned propaganda that always reflects poorly on Australia and whatever he says has little impact outside of the Green-Left of the political divide.  That is, about 10 % of the community give Pilger any credit whatsoever.  This 10%, of course, encompasses the ABC and SBS where he is often seen talking about his hatred of Australia – but we expect that. Back to today’s article.

Michael O’Loughlin was watching Sydney play West Coast when his seven-year-old son James turned to him with a question he could not easily answer: “Dad, why are they booing uncle?’’

It is the question all of football — and much of the nation — is now grappling with, as the AFL, Sydney and opposition clubs look for a way to stop crowd abuse of Adam Goodes.

Good ploy – play the cute little nephew. Pure Facebook campaigning. ..as the AFL, Sydney and opposition clubs look for a way to stop crowd abuse of Adam Goodes.  With all the recent press on the mater, with more people remembering his abuse of the teenager, I don’t think the crowd are going to forgive him anytime soon. He says he is campaigning for Reconciliation but I see little conciliation in starting the debate by saying it is hard for him to be proud to be Australian because, according to left wing Pilger, we are all racists. I predict his post-football career will be in politics where his character will be well and truly tested when the crowd becomes all of Australia, not just a few thousand at a footy match. Will he be able to cut it? That remains to be seen.
0
Indigenous Affairs, Politics