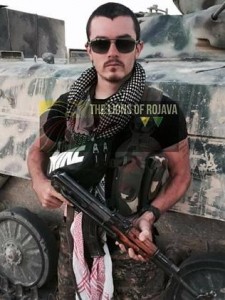 A Brisbane man deported from Germany who spent several months with Kurdish fighters battling Islamic State in Iraq and Syria remains under invest­i­gation after being released without charge. Ashley Dyball, a 23-year-old former weightlifting enthusiast, returned to his family’s home in the Queensland capital yesterday after being questioned for several hours on arrival at Melbourne Airport late on Sunday night. Despite claims Australians who fight with the Kurds may avoid prosecution, it is understood Mr Dyball was released ­because police lacked the grounds on which to charge him under foreign-fighter legislation. Those convicted under the legislation face up to 25 years in jail.

Immigration Minister Peter Dutton yesterday said that it was “difficult” to punish Mr Dyball because he came from a “very good family”.

What a ridiculous statement. So did Brett  Cowan,  murderer and sex offender who was convicted of the murder of Daniel Morcombe. I personally knew his father. Coming from a "good family" is a matter that the judge might consider when sentencing a person if found guilty but it certainly shouldn't be considered when deciding whether someone should be charged or not. Immigration Minister needs to have a chat with Attorney General
1
War on Terror