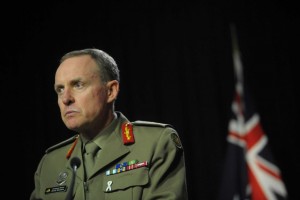 'Friendly fire': When soldiers survive war, but are massacred on the battleground of Army politics. An article by Robert Ovadia.

“Hi Rob, bad news from my front again as I’m back in hospital.”

It was the beginning of a text message I’d received the night before. ‘Hospital’ is where this man had been a number of times since 2013, with mental health issues. This time, though, it’s a ‘hospital hospital’. “Cut through my wrist but I’m still here,” it continues. “I’m currently listening to a guy who thinks he is God. All good.” The 'PTSD wing' of a military hospital is a colourful place. He is a former high-ranking officer in the Australian Army.

Former army chief, Morrison, made a name for himself surfing a tidal wave of support for a brutally eloquent speech castigating men in the army who demean women.

“The standard you walk past is the standard you accept,” he famously scowled through words written for him by someone else. It made him famous. He became an enigma, the enfant terrible of the Australian Defence Force. He spoke at a United Nations conference alongside Angelina Jolie. He became a champion of feminism, the darling of those who swooned at the narrative of the feminist general and now he is our Australian of the Year. Some republicans even suggest he would make an ideal president of Australia, one day.

Not a good recommendation for a man who is supposed to be leading an Army.

Brave military men left to fight in the dark. An article by Miranda Devind

ON the night of Australia Day, last Tuesday, a former lieutenant colonel we will call “Ken” sat in front of his TV and watched in despair as his old Chief of Army, David Morrison, was awarded the honour of Australian of the Year.

Ken drank too much that night and then he tried to kill himself. It was his second suicide attempt since Morrison stripped him of his command, destroyed his career, and publicly shamed him by incorrectly identifying him as a member of the so-called Jedi Council “sex ring”.

Loyalty is supposed to be a two-way street.

And then this appears in today's The Australian

Former army chief David Mor­­rison is charging up to $15,000 for speaking engagements as Australian of the Year, up to three times more than his predecessor Rosie Batty asked for each appearance.

I'm actually offended by the fact that he is receiving vast sums of money simply because he made a speech denigrating the Army.

I note in the pic above he is wearing a Stop Violence Against Women ribbon award.  I see your white ribbon general and raise you an Infantry Combat Badge. The ribbon is not a military award and should not be worn on Uniform.  The Generals in the Army I served in mostly had Active service medals and Bravery awards as would be expected of men charged with leading fighting soldiers.

This man sports a white ribbon.

I don't think I'd fit in today's military.

UPDATE:  Michael Smith notes the absence of an ICB as well

PS - Morrison calls himself a Veteran.   He joined the Army in 1979 and was commissioned into the RA Inf.   He must have worked very hard to avoid exposure to the ICB over those 36 years.   ICB, no, white ribbon apparently makes up for it.