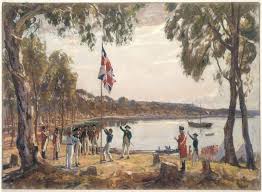 Posted on Thursday, 23 Jun 16 by Kev
Turnbull says we invaded Australia- Abbott said we occupied. If it was an invasion then the 245 marines that accompanied Phillip would have been the greatest force multiplier ever assembled. Statistically greater than the D Day force at Normanby or Ghengis Khan's mob that overrun Europe. 7.7million square kilometers, hundreds of thousands of locals and 245 Marines sorted them out. Not only did they do this but they did it with Phillip stating Rules of Engagement that ordered them to treat the Aboriginals kindly and to establish harmonious relations with them. Abbott is right and the Invasion mob should stop playing around with the English language.
1
General Musings, Indigenous Affairs