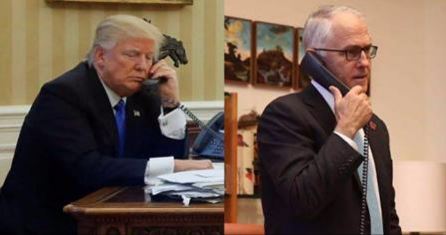 Turnbull gives a speech after Trump's win and says to Australia“don’t panic”; Frydenburg called Trump a “dropkick”; Bishop said before the election that Trump threatens Australia’s interests and the leader of the Opposition calls Trump "Barking Mad"

There's payback due there and I can't understand why Australia is upset at Trump giving Turnbull a hard time.

What benefit does the US get from taking in our 1250 country shopper problems?. None that I can see particularly after Trump's pause on accepting people from the same area that the 1250 come from.

If he takes them he is backing down on one of his election promises and, after all, the entire deal was set up by Turnbull and Obama during OBama's lame duck days.

A deal will eventually be stitched up but I'm with Trump on this one.