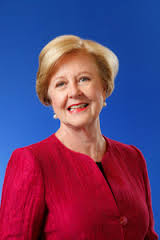 All of which suits Liberty Victoria’s charter.

But not our Georgie.  No sir! She’s way ahead of that.  Full sentence…complicated word.