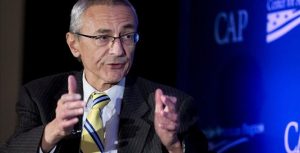 This man is costing Australia billions

Hillary Clinton’s campaign accuses Vladimir Putin of interfering in America’s election by supposedly supporting Donald Trump. But Australians have a well-founded complaint about one of the Democratic nominee’s key advisers. Campaign chairman John Podesta helped coordinate a green lobbying and lawfare campaign to stifle the Australian coal industry, emails released by WikiLeaks show. Australian greens are fighting a new A$16 billion ($12.24 billion) mine in Queensland that would supply coal to Indian power plants and create 10,000 jobs. The federal government and Labor Party-controlled state government approved the project with more than 200 environmental conditions. But the Sunshine Project and other groups continue to file nuisance lawsuits to block it. Tax-exempt charities can accept foreign money under Australian law but they can’t lobby the government. In this case the U.S.-based Sandler Foundation, part of the anticoal coalition led by Mr. Podesta, contributed to the Sunrise campaign against the mine that clearly constituted lobbying.
In emails to Mr. Podesta, Sunrise’s John Hepburn seeks ideas on how to retain its charitable status and avoid disclosing its funding to a parliamentary committee. The emails spell out how Sunrise gave financial support and scholarships to indigenous groups to block the mine.
Australian politicians are furious. Prime Minister Malcolm Turnbull condemned these “very systematic, very well-funded campaigns against major projects.” Resources Minister Matt Canavan said the greens “seek to subvert our legal system for political ends.” The government is considering legislation to restrict charities from bringing lawsuits. New Delhi and the company backing the mine, Adani Group, are also upset. Power Minister Piyush Goyal says the delays ‘’will certainly dampen future investments’’ in Australia. Without the Queensland mine, India will have to import lower-grade coal from Indonesia and elsewhere, leading to more pollution. The Institute of Public Affairs in Sydney released a report last month that found 87% of the lawsuits that green groups bring under the Environmental Protection Act fail. Yet they cause delays that cost Australia up to A$1.2 billion annually. The global anticoal campaign supported by Mr. Podesta has so far succeeded in stopping the Queensland mine. But its use of deception and foreign money could spark a backlash. In one email, Mr. Hepburn told his foreign supporters that, “Without your support none of this would have happened.” Then he mocked those who claim “there is some kind of foreign-funded and tightly orchestrated conspiracy to systemically destroy the Australian coal industry,” ending with a self-congratulatory joke: “I seriously don’t know where they get these wacky ideas from.” Australians aren’t amused. Source: Wall Street Journal