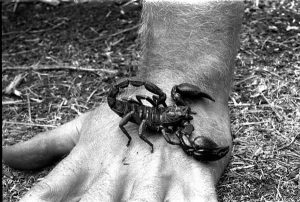 Reading Tim Blair's post on scorpions reminded me of this little devil from my youth.

We were at a fire support base and it had been raining all night.  My pit was full of water so when morning stand-to came I was up to my groin in water, standing with rifle in hand and extra mags and hand grenades near by, in case Charlie dropped in. Army SOPs mostly don't consider weather so stand to is in your pit; doesn't matter how uncomfortable it is, it is always better than being above ground should the bad guys attack.

Any way, as the sun came up I noticed I wasn't alone in the pit - a scorpion was in with me swimming around trying to get out. One of his possible exits was to climb the big object in the water with him and that would've entailed him gaining access to my body via my groin area. I leapt out of the pit like a young colt because a young colt I was in those days and really, really wanted to maintain the "Colt" status. I quickly planned his demise on the basis that at time of my life, not even humans could threaten my life, let alone a scorpion, without paying the supreme price.  He was bottled and given a big drink of methylated spirits that the Int Section used to clean map plastic (talc) covers.

The Adjutant, Andy Mattay (God Bless and Rest in Peace Andy) thought it was hilarious and took a photo for posterity

I would point out that I'm a big man and have what are arguable the biggest hands in the country, so he's no little scorpion like Tim Blair's. You could use this one as a cattle dog it was so big.

Just another day in my not-so-boring life.