Posted on Friday, 25 Aug 06 by maxymax
My Vietnam almer mata was the 7th Battalion, The Royal Australian Regiment (7RAR) (could media types note the correct nomenclature) and whereas yesterdays' announcement by the PM that we are upgrading the Army by 2, 600 men, mostly infantry, will be discussed long and hard by the media and a host of  professorial type armchair warriors, I and a host of my Vietnam era mates will only take one message from John Howard's announcement. 7RAR live again to fight the foes of civilization.  7RAR has a proud history of Vietnam service and I just know that the younger generation will meet with the high expectations of us old soldiers. 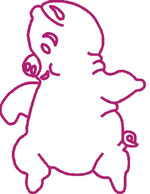 The Pigs?  No we were not unhiegenic (although we might have been on the nose a tad after a four week patrol in the jungle).  The story of our mascot goes back to 1965 when the battalion was first formed at Puckapunyal.  The newly appointed Commanding Officer (CO) thought he would have a look at his command and went up to Puckapunyal on a weekend ....unanounced ...sneaky bugger, to check them out.  The few soldiers who had gathered as the nucleus of the battalion had been in the habit of spending most of their weekend in the boozer and this weekend was no different.  There were few NCOs or officers posted in too date and the boozer was a mess of beer cans.  On parade the next morning the CO called them a bunch of pigs to be answered by a loud retort of oink..oink from the back row. For a long time the Generals and the Colonels fought the idea of a pig as a mascot which guaranteed it's longevity.  Today it is on our banners, stationery and badges and will be around as long as history holds our attention. I'll make a bet right now that when the new 7RAR is formed and has it's first parade, some old grey haired or bald ex digger will be there with a pig in attendance, a real one, to remind the young ones of their traditions. Are you reading this Dave W? UPDATE:  The Battalion was first formed on the 1st of September, 1965 so next week, Friday, is our 41st birthday.  I wonder if the Army and/or Politicians have a sense of history and are considering releasing the official documentation to split 5/7RAR on the same day? It would be historically tidy.
Defence