Back From Darkest Asia

Well, that's what it seems like. Now resident in the Grand President Appartments, Sukhumvit, Bangkok, the appartment is decidedly presidential after the last eight days in Cambodia. Welcomed also is the front page of the Bangkok Post announcing "Ruthless Aust win back Ashes" All I need to make it a great day is a couple of Poms at the bar tonight

We flew out of Bangkok just over a week ago with Bangkok air and had a very good short flight to Phnom Penh. Picked up at the airport by our Khmer contact we drove to Kampot in a Mercedes Van thus heralding my reinsertion into Asian culture. It was a hot insertion as well as the traffic can be best described as chaos in motion. Mitsibishi vans with 15 people inside, three 150cc Honda bikes on the roof and three other people hanging onto them. We watched amazed as one guy transfers from inside the van to the cooler upstairs seats (read roof) and we then pull out to pass a truck to be confronted by 10 Hondas coming straight at us. Everyone merges...against all apparent odds (to a western eye) and we get back into the comparative safety zone of the right hand lane. If the van had seat belts they were not apparent which would've gone some way to calm my fears as we risked head-on crashes at a frequency of at least 20-25 per kilometer.

We book into the Sen Monorom Guest House and get used to life at a different pace. The French have a lot to answer for in South East Asia but surely the legacy of their plumbing has to top the list. A bidet is the local answer to hygiene and the bathrooms are unusual to say the least. 2.5 metres square; a toilet in one corner, a hand basin in another, the shower on the wall with intermittant hot water; all with a drain hole on the floor in the furtherest corner from the shower head. This guarantees the floor and your clothes are always wet unless you strip before entering.

The Guest House looks good from outside; 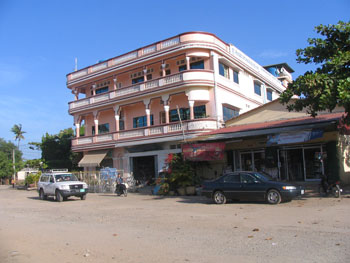 but on closer inspection the painters could've used a tape measure; 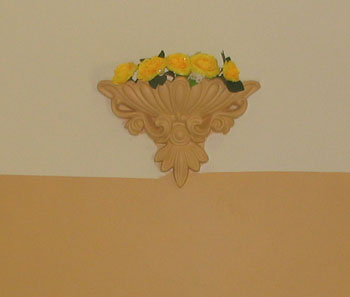 and maybe R&M could be given a higher priority. 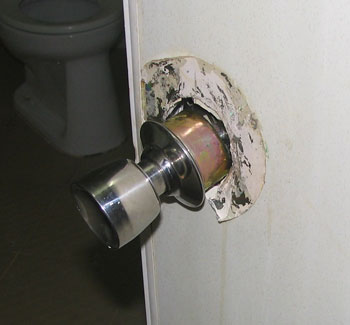 Notwithstanding all the above the staff were very friendly and helpfull and the rate was only $20.00US per day. We went down town and had lunch at a local food/drink bar. Food is good and very cheap while Beerlau costs less than 1.00 a glass and became the preffered drink for the group.

We are in town, fed and watered and ready to start. Through the afternoon we rest up in preparation for meeting the Khmer and expat players at a BBQ at a locals riverside house. We are promised a cow on a spit, plenty of local refreshments and transport to the event on a traditional Khmer long boat.

More tomorrow. I can hear some Poms in the bar and I need to chat to them. I might start the conversation by saying straight face.."We've been bush in Cambodia for a week...do you know how the last test went?"