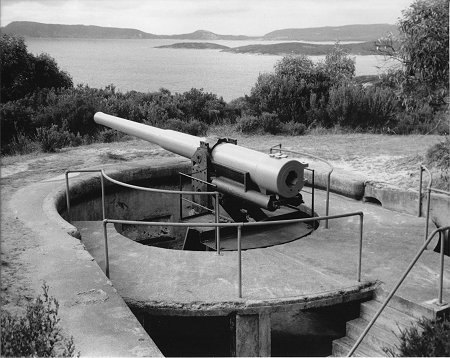 Posted on Sunday, 24 Apr 16 by Kev
Albany, WA.  Gillett’s have been defending the country since the 1890s when my Grandfather and his brother enlisted in the Forts at Albany. The nation was worried about the Russians as they were snooping around the continent so they built a fort at Albany overlooking King George Sound. In 1791 Captain George Vancouver claimed the Southern Part of Western Australia for the British Crown.  As he explored the coastline, he discovered one of the world’s finest natural harbours and named it Princess Royal Harbour and King George Sound. During the 19th century, the loss of this strategic port to any enemy was identified as a potential threat to the security not only of Western Australia, but the whole of Australia.  As a result all the Australian states agreed to to pay for the construction of a fort and the British Government would supply the guns.  The Fort was opened in 1893 and was the first federal defence of Australia. There you go, the states can agree on something! The Princess Royal Fortress has two gun batteries dug into the hillside of Mount Adelaide -Fort Princess Royal ( 2 x 6 inch guns) and Fort Plantagenet ( 1 x 6 inch gun) . From 1893 to 1956 the guns of maintained their role as a deterrent and never fired a shot in anger.  Pity! Both these guys served in the Boer War enlisting from Albany and both survived.  They went on to serve in WW1 and one of them, my Great Uncle, in WW2. When the Anzac fleet left King George Sound in 1914 on board were two other Great Uncles, neither of whom survived their war. Both stayed in France My father, his brothers and my Mother’s brothers served during WW2 and Dad often came to the port of Albany when his RAN ships were escorting convoys or mine sweeping. One of my maternal uncles stayed at the River Kwai. In the early 60s I left to see the world, through the sites of a gun, as the wits of the day would have us believe. But circumstances had it that I would eventually serve in South Vietnam during my 25 years service. A mob of cousins also served in SE Asia in the RAN and Army and one even served in the RAAF. ( don’t know what happened there ) All of which s a bit of a load to carry tomorrow when I participate in the Anzac Day commemorations at Albany.  Marching along Stirling Terrace with the ghosts of my fathers on my shoulders makes it all the more significant.  I’ll go to the RSL later and maybe have a beer or two and remember my mates left behind in SE Asia and pause to toast my Fathers and their service and their mates they left behind. There were a lot. Thanks to them, in part, and men and women like them, we are free of the menace of Germans and Japanese and left to develop into a free nation.  Other nations are glad they served as well – just talk to the French and Pacific Islanders about that. Because of their service, and many other reasons of course, Australia has developed into an amazing place to live. Thanks guys. I normally spend the day with my mates from 7RAR but for family reasons I’m in Albany, far away from the main stream commemorations.  To all of you – have a good day and don’t forget to toast the boys we left behind. RIP
1
Defence