Assange drums up support through UN 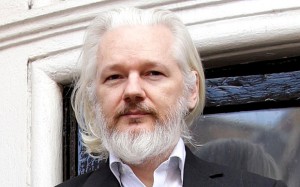 Julian Assange illegally detained, says UN panel.  So do all his left wing, anti US and useful idiot supporters.

Big deal as he isn’t detained at all. Other than the rape allegations in Sweden he needs to be brought to book over treason and given 20 to life for the damage he’s done to the West’s fight against terrorism.

Assange’s legal team has argued that the favourable ruling means the Swedish prosecutors — who have yet to charge Assange with any crime, but want to question him over a rape allegation — should revoke the arrest warrant and he could walk free.

It doesn’t mean that at all. He should answer the charges.

But any such move may take time. The UN Human Rights spokesman Christophe Peschoux told Associated Press the application of the group’s decisions were rarely immediate and could take months to be applied. Countries can appeal the finding to the working group.

They can also ignore it. He is not actually detained as he chooses to hide away in an embassy like a cur.  Thus the whole exercise is just to give Assange some oxygen as he fights his real problem – being arrested and extradited to the US to face charges of publishing confidential documents. Come on you bastard, if your so sweet and innocent, step out on the street and face your accusers.
14
Crime, War on Terror

Disgraced former union boss and ex-ALP MP Craig Thomson has no money to pay any penalty imposed over hundreds of thousands of dollars in union funds he used without authority, including for prostitutes, the Federal Court has heard. That’s OK Craig, the courts have an answer for your problem  There is a formula of so many days in jail per thousands of dollars of fines so you can work it off. All the best and don’t drop the soap!
0
Crime, Politics

Bikie gangs back in business?

Posted on Saturday, 9 May 15 by Kev
I just went down to the shops and passed about a hundred bikies all resplendent in their club colours and taking up about a kilometer of road. I take it that under the new Queensland ALP Government crime gangs are once again free to consort and indulge in extortion, prostitution and drug running as in days of yore. I haven’t noticed any press releases on the matter but it must be so.
7
Crime

Posted on Monday, 5 Jan 15 by Kev
From the Courier Mail OPPOSITION Leader Annastacia Palaszczuk will have the backing of exiled bikies across Queensland when she goes to the polls this year. Labor’s pledge to repeal and replace the controversial anti-bikie laws is likely to score her thousands of votes from not only disgruntled motorcycle gang members but also their families, associates and even charities that benefited from their fundraising, bikie chiefs say.

So prostitution, drug running and extortion are the new sports.

Who’d have thought that?

Posted on Wednesday, 19 Mar 14 by Kev
“My husband is a good man” according to the current Mrs Thomson which makes me wonder what the previous Mrs Thomson thinks. Christa Thomson was still married to him when he was on a spending spree booking whores, porn, booze and travel up to the HSU membership. He is claiming depression from the break-up of his marriage to Christa caused him to seek solace elsewhere however he also claims Christa was with him at times when is accused of consorting with the ladies. Magistrate Charlie Rozencwajg doesn’t seem to be impressed with Thomsons depression plea.

“I’ve never met anyone who’s not depressed at the prospect of going to jail” he said, as Thomson’s QC passed up the magic report.

Thomson had agreed to repay the HSU the $24,538.42 he embezzled with union-issued credit cards and a Flight Centre account. $24,538.42! What about $389,000 of union money spent on getting himself elected to Parliament. The thousand-page report by Fair Work Australia, made public this week, paints a fascinating picture of a man prepared to lie about the more than $250,000 of union funds he spent on trips, holidays with his ex-wife, an airfare for his brother’s girlfriend, wining and dining, and even prostitutes. Every cent of that spending – even the 14 airfares for his ex-wife – was legitimate, Thomson told FWA. Except for the prostitutes, of course. Craig’s world is described here Michael Smith has good coverage and well worth the time to read The saga is nearly over and, I hope, it will end with Thomson’s incarceration.
0
Crime, Politics, Union Rorting

Posted on Thursday, 30 Jan 14 by Kev
THE act of paying for prostitutes, adult films or other items on a Health Services Union credit card did not mean that Craig Thomson had defrauded either the card issuer or his employer, Mr Thomson’s defence counsel argued yesterday as the sexually charged and lurid case against the former Labor MP drew to a close. How can he say that?  How can anyone justify spending members funds on personal sexual gratification? Maybe the Health Services Union don’t have written clause that says “HSU Credit Cards are not to be used for any purpose other than those that are of benefit to the Union” or, more specifically, to cover grubs like Thomson “…are not to be used for prostitutes”. If they dont, they should.  If the HSU Board hasn’t discussed and approved inserting clauses in their management protocols as a result of Thomson’s nefarious activities then one must ask why not? It could be construed that they are simply maintaining the gravy chain for future office holders If Thomson gets off this then it is another reason to have a Royal Commission into Union thuggery, rorting of members monies and standover tactics in the building industry. I don’t have a problem with unions per se, just union officials rorting members funds (HSU), and/or committing every crime against civilization (CFMEU)
13
Crime, Politics

Posted on Tuesday, 7 Jan 14 by Kev
THE first alleged bikies from interstate arrested under Queensland’s controversial new anti-association laws face three years’ jail for walking down a Surfers Paradise street together looking for ice cream. Yeah…right. If I was their lawyer that’s what I would say, or maybe I’d ramp it up a bit , “we were going to take our Grannie out for lunch”…or, “we were looking for a labrador puppy to cuddle” or “we were going to the bank to withdraw our life savings so we could give it all to the poor”. I certaintly wouldn’t mention the truth, whatever it might have been on that occassion. From “On the Origins of Consorting Laws, University of Melbourne

In particular, two inquiries conducted by the Commonwealth Parliamentary Joint Committee on the Australian Crime Commission between 2006 and 2009 showed that criminal gangs had diversified their activities across illicit drug trafficking, illegal firearms, money laundering, fraud, stock market manipulation, extortion and protection rackets, counterfeiting, and vehicle rebirthing; that groups were working collaboratively, flexibly and across state borders; and that the annual cost to the Australian economy was $10 billion. Motorcycle gangs were specifically labelled as being linked to most forms of serious organised crime.

You should read the entire paper  before you enter into any debate about how unfair the laws are based around the statement that ‘we were only getting an icecream’. Since Federation, consorting laws have been legislated for one sole reason – to break up criminal gangs.  It is fair that the laws be debated but only in the context that we need to get control of criminal gangs – not in the context that every bikie is a hard done-by victim – it is the victims of their crime empires that are hard done-by. However, I can understand how difficult that is in a society where just yesterday a thug who king hit a bystander was given bail even though he was on bail for a previous count of thuggery whilst armed with a machette! The Bikie gangs are spending big on positive PR and lawyers to try and maintain their right to control “illicit drug trafficking, illegal firearms, money laundering, fraud, stock market manipulation, extortion and protection rackets, counterfeiting, and vehicle rebirthing” and I, for one, can see why – it’s worth billions to them. Some Vietnam Vets of the bikie variety are screaming innocence but a quick look at their website leads to links to criminal MC Clubs proudly sporting their 1% patches. From Wikipaedia;

Some outlaw motorcycle clubs can be distinguished by a 1% patch worn on the colors. This is claimed to be a reference to a comment made by the American Motorcyclist Association (AMA) in which they stated that 99% of motorcyclists were law-abiding citizens, implying that the last one percent were outlaws. As a result, some outlaw motorcycle clubs used it to unite or express themselves and are commonly referred to as “one percenters”

Suck it up guys – if you want to lay down with dogs you’ll get up with fleas. The Australian Crime Commission thinks they’re criminals –from their website

The ACC has also committed to a range of other activities and its powers, however due to operational reasons, these cannot be detailed.

Serious and organised crime groups, such as OMCGs, operating in Australia continue to be formidable in their capabilities, resources, resilience and their ability to corrupt and exploit national and international opportunities and connections.

OMCGs remain one of the most high profile manifestations of organised crime, and they have an active presence in all Australian States and Territories.

During 2012, there were 44 active OMCGs in Australia, comprising of 4483 individuals (excluding associates and prospects).  This represents an increase of 53 per cent since 2007.

It’s just business, dear reader.  We are now getting imigrants from the US and South America wanting a piece of the ever increasing metamphetamine and other drugs markets.  Now these guys really know how to run criminal entities and the current gang wars is proof of that – they are all looking to set up a monopoly. Just watch  old movies about the Mafia to see how that might pan out. Me, I’m backing the police and if a few Bikies can’t cuddle a labrador pup or buy an icecream then I don’t really care.
20
Crime