Posted on Friday, 12 Jan 07 by Kev
A very small group of interested Cambodians, Australians and Dutch, myself included, are setting up a scheme to help Cambodians - well, a very small group of them - to come out of the horror and chaos that was Pol Pot's genocidal regime. We have come to a small town on the southern coast called Kampot where years previously there had flourished a series of pepper plantations that marketed Kampot pepper to the world. As early as 1888 there are records of pepper being grown and exported by the Chinese and later when the French colonialized the area the pepper took on greater value and a French chef in Paris wouldn't think of offering any meal without Kampot pepper along side the salt containor. The first part of our trip to Kampot is described here and takes us from Brisbane Australia to Kampot. When we arrived at Phnom Phen airport we were met by two people already involved in the project. One, a Cambodian national name Nareoun and the other, an expat Dutch woman name Jose. Jose had been involved in NGOs in Vietnam and Cambodia and has an abiding interest in lifting the circumstances of the local people. 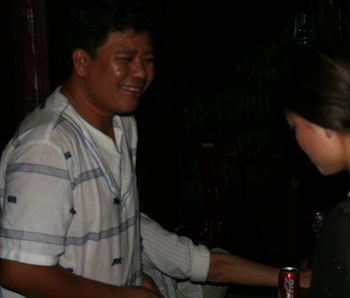 Nareoun was a survivor of Pol Pot's genocide. He was a small child when his family were taken to the Killing Fields and on the road he was grabbed by a local peasant who could see what was going on and hid him behind some scrub. When the Khmer Rouge soldiers came back for him the farmer said he was his son and they left satisfied. The boy was smuggled out through the islands in Southern Cambodia and ended up in Hanoi at an orphange. He never saw his parents again. He grew up and later returned to Cambodia where he secured a government job involved in making sense out of the chaos that had been Pol Pot's genocidal regime. When the Vietnamese attacked to quell Pol Pot, his brand of communism being too severe even for them, Nareoun's potential was recognized and he received a scholarship to a university in Hanoi. At this university he met a Dutch Professor named Ardrie who also recognized his potential and a relationship developed. Some years later a son of my friend and friend of my son, Tim, moved to South East Asia and worked, and still does, for an American company that handles sea food processing plants in SEA. When looking for plant managers he sought out educated locals and eventually employed Nareoun as a manager in Cambodia. Tim went back to Cambodia where Nareoun had some land and a house on the river at Kampot; fell in love with the place and laid claim to a block himself. He looked around Kampot, saw the tragedy that it was with it's poverty and aftermaths of war and decided to help. Through Nareoun, Tim met Professor Adrie P. van Gelderen at Hanoi and began to talk of the problems in Cambodia. Tim's business of buying and packaging seafood for the US was a case in point. All produce from Cambodia was sent to Vietnam or Thailand and packaged there. Nobody wanted to buy Cambodian products so the country wasn't even getting the flow on. Even today in Angkor Wat all the hotels buy their food from Thailand. The group decided to do something about it and the plan was hatched to buy some land in Kampot, install some farmers out of the Thai refugee camps, plant pepper and lift their lives. The land was duly purchased through the auspices of a Dutch " Affiliate" roughly equivalent to a 'Foundation' in english and established by the good proffessor. Professor van Gelderen had spent years in South East Asia and had developed a desire to bypass the standard asian and western bureacracies to get help to the underpriveledged where it mattered; at their homes and villages and in their schools. He has been quoted as saying; 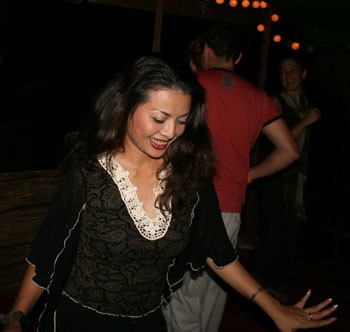 At the same time as Nareoun was going through his ordeal a young Cambodian girl, Neang, was going through the same ordeal and ended up in the same orphange and both of them went through uni together. A long lasting friendship developed. Neang is married and lives in Phnom Pen but they have joined forces again to help their people. Neang came back to Cambodia after Pol Pot was displaced and ended up being the Private Secretary to Norodom Sirivudh, Supreme Privy Counselor to His Majesty the King and Parliamentary Member. Norodom Sirivudh was appointed King but declined, believing he could do more for his people as an MP. His nephew was appointed King and Norodom does advise HRH. Later on during the trip we had afternoon tea with this man courtesy of Neang. Norodom had heard of our project and wanted to hear what we had to say and likewise, wanted us to hear what he had to say. More on the smoko with royalty later. We met Neang for the first time at the BBQ and if ever a project was graced with a class act then Seang was it. Motivated, compassionate, educated, gracefull and an integral part of the ruling class of Cambodia she was obviously going to have an impact on whatever happened. On the trip down we had been promised a BBQ at Nareoun's place on the river with transport provided in the form of a traditional Cambodian river boat, a cow on the spit and plenty of local beers. It sounded good and turned out to better. Our first sunset in Kampot we waited on the river bank for the traditional Cambodian boat to arrive the traditional Cambodian way - an hour late. We waited at the Rusty Keyhole Bar and developed a taste for Beerlau while waching the sun set over the river. 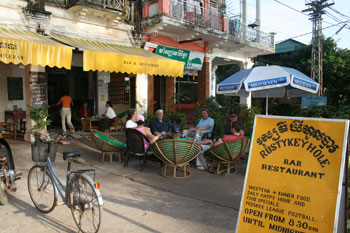 waiting....waiting....waiting The boat duly arrived and after some fuel feed problems we were underway. The boat stopped at a local house to pick up more partygoers and I noticed a small dog scrambled on board. The dogs owner noticed it as well and picking it up nonchalently through it overboard....not invited! The boat took off and the dog was last seen swimming in circles looking for a landing point. We went upriver through magnificent jungles and eventually Brian points out Nareouns house on the river banks. The boat kept going. After some hundreds of metres I asked whether he knew if the boat 'Captain' knew where he was going. The question was raised; there were initial language difficulties to overcome but eventually it became apparent that the 'Captain' didn't know where the hell were going and 'Yes, they would now head back towards Nareoun's place' It's reasonably dark now and we are headed for a landing that we can see by virtue of a light at the end of a jetty. What the light didn't shine on was the Lantana bush that the 'Captain' unerringly targeted as we approached land. We alighted with some difficulty as the jetty was approximately 1.5 metres below the level of the bow and it all had to be done through the lantana. Woman and children first....many helping hands and then the men had to lower themselves down by their arms to reach dry secure land. We had arrived at the BBQ and it turned out to be a significant start to our visit. We met all the local players, expats, others with a dream to reinvigerate Kampot Pepper and still others who for different reasons have an impact on what happens in Kampot To be continued.....
Travel